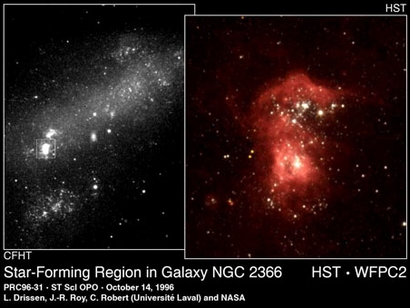 Clusters of stars and a fishhook-shaped cloud of luminescent gases glow brilliantly in NGC 2363, a giant star-forming region in the Magellanic galaxy NGC 2366. Even though the nebula is 10 million light-years away, the Hubble Space Telescope resolves details comparable to such nebulae in our own galaxy. This region is as bright as the gigantic 30 Doradus nebula in the Large Magellanic Cloud, a satellite galaxy to our Milky Way.
View »
27-Jan-2023 01:18 UT