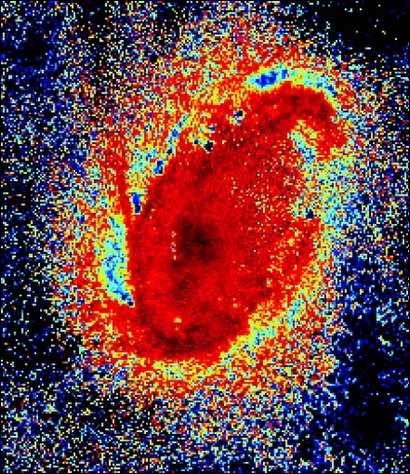 The Cartwheel's nucleus is shown in this Hubble Space Telescope color-coded image. The comet-like knots of gas are mostly confined to the core's left side. They are the blue knots arranged in a semi-circular pattern around the center of the nucleus. The "heads" are a few hundred light-years across; the tails are more than 1,000 light-years long, the longest of which is nearly 5,000 light-years.

The structures look like comets because they probably were spawned by a collision between high-speed and slower-moving material. This collision created an arrowhead-shaped pattern called a bow shock, which is similar to the wake of a boat speeding across a lake.