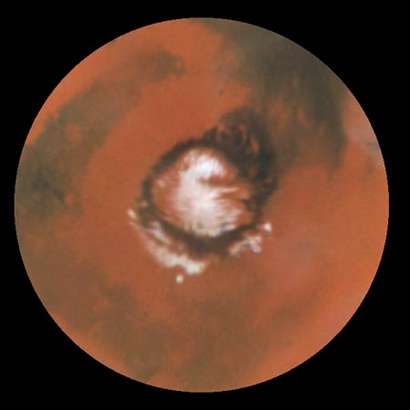 The cap has fully retreated to it's remnant core of water-ice. This residual cap is actually almost cut into two by a large, horn-shaped canyon called Chasma Borealis which is cut deeply into the polar terrain. The HST images also reveal a curious layered terrain which is evidence of past climatic changes on Mars.

The sublimation of all of the carbon dioxide has exposed the ring of dark sand dunes which encircle the North Polar Cap. Outliers of ice persist south of the polar sand sea (between the 3 o'clock and 9 o'clock positions). The bright circular features at 3, 6, and 9 o'clock are ice-filled craters.