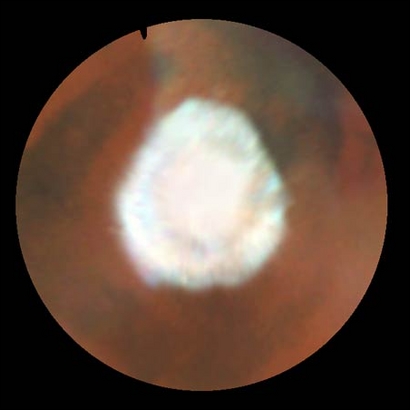 Increased warming as spring progresses in the northern hemisphere has sublimated the carbon dioxide ice and frost below 70 degrees north latitude. The faint darker circle inside the cap boundary marks the location of circumpolar sand dunes (see March '97 map); these dark dunes are warmed more by solar heating than are the brighter surroundings, so the surface frost sublimates from the dunes earlier than from the neighboring areas.

Particularly evident is the marked hexagonal shape of the polar cap at this season, noted previously by HST in 1995 and Mariner 9 in 1972; this may be due to topography, which isn't well known, or to wave structure in the circulation. This map was assembled from WFPC2 images obtained between Dec. 30, 1996 and Jan. 4, 1997.