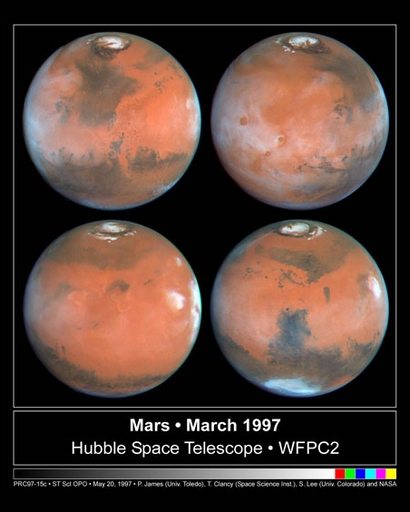 Four faces of Mars as seen on March 30, 1997 are presented in this montage of the Hubble Space Telescope images. Proceeding in the order upper-left, upper-right, lower-left, lower-right, Mars has rotated about ninety degrees between each successive time step. For example the Tharsis volcanoes, which are seen (between 7:30 and 9 o'clock positions) in mid-morning in the upper-right view, are seen near the late afternoon edge of the planet (about 3 o'clock position) in the lower-left image. All of these color images are composed of individual red (673 nanometers), green (502 nm), and blue (410 nm) Planetary Camera exposures.
View »
3-Dec-2021 18:43 UT