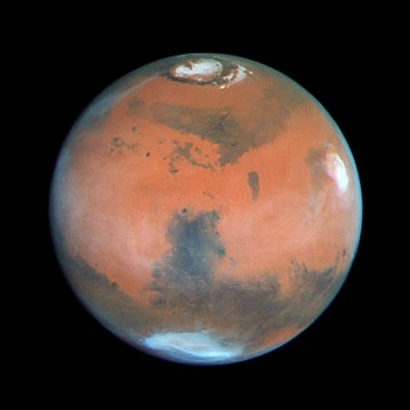 The dark Syrtis Major region dominates this image. Syrtis Major is one of the most prominent dark features on Mars, and has been visible since ground-based observers first peered at Mars through telescopes.

The bright cloud at 3 o'clock is associated with Elysium Mons. The bright bluish-white feature near the southern limb of the planet is Hellas, a 1,200 mile (2,000 km)diameter impact basin formed by the collision of a large body with Mars long ago. Hellas is covered with dry ice frost and clouds during this season (winter in the south).