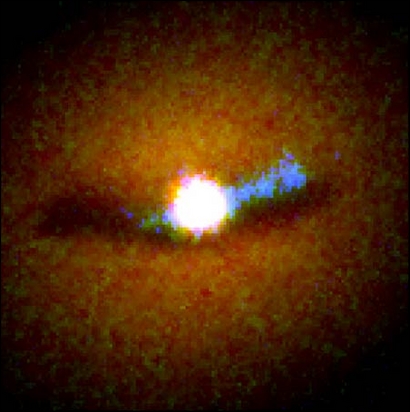 This composite image of the core of the galaxy was constructed by combining a visible light image taken with Hubble's Wide Field Planetary Camera 2 (WFPC2), with a separate image taken in ultraviolet light with the Faint Object Camera (FOC). While the visible light image shows a dark dust disk, the ultraviolet image (color-coded blue) shows a bright feature along one side of the disk. Because Hubble sees ultraviolet light reflected from only one side of the disk, astronomers conclude the disk must be warped like the brim of a hat. The bright white spot at the image's center is light from the vicinity of the black hole which is illuminating the disk.
View »
2-Feb-2023 11:32 UT