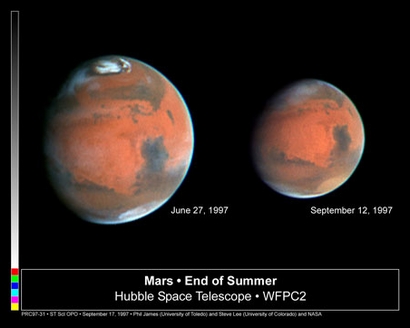 The NASA/ESA Hubble Space Telescope obtained the picture of Mars on the right on 12 September 1997, one day after the arrival of the Mars Global Surveyor (MGS) spacecraft and only five hours before the beginning of autumn in the Martian northern hemisphere. The picture on the left shows Mars as seen on 27 June 1997, two and a half months earlier.
View »
27-Sep-2022 14:04 UT