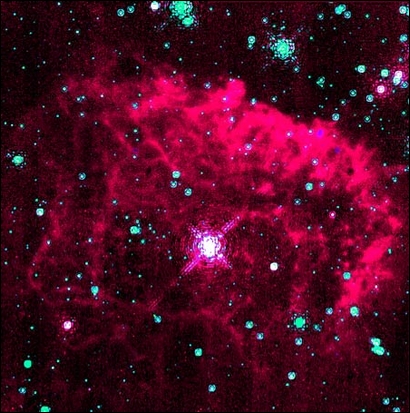 Depicts: One of the brightest stars in the Galaxy
Copyright: Don F. Figer (UCLA), and NASA
Show in archive: true

One of the intrinsically brightest stars in our galaxy appears as the bright white dot in the center of this image taken with the NASA/ESA Hubble Space Telescope. Hubble's Near Infrared Camera and Multi-Object Spectrometer (NICMOS) was needed to take the picture, because the star is hidden at the galactic center, behind obscuring dust. NICMOS' infrared vision penetrated the dust to reveal the star, which is glowing with the radiance of 10 million suns.
View »
29-Jan-2023 00:16 UT