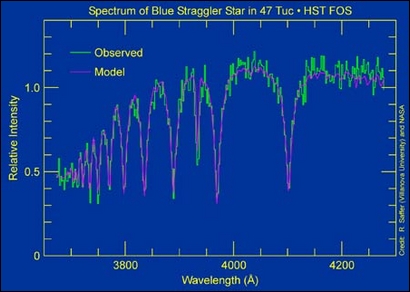 A star's light yields clues about its identity which are not revealed in an image. That's why astronomers use spectrographs to decode the light. A spectrograph disperses light into its component colors, providing information on a star's rotation velocity, temperature, and surface gravity. The spectrum above compares a computer-generated spectrum of a blue straggler star with one from the observation of the blue straggler in 47 Tucanae, taken by the Hubble Space Telescope's Faint Object Spectrograph. The model spectrum predicts the shape and depth of a blue straggler's spectral lines. Based on this comparison, the Hubble telescope observation clearly matches the model.
View »
29-Nov-2022 21:02 UT