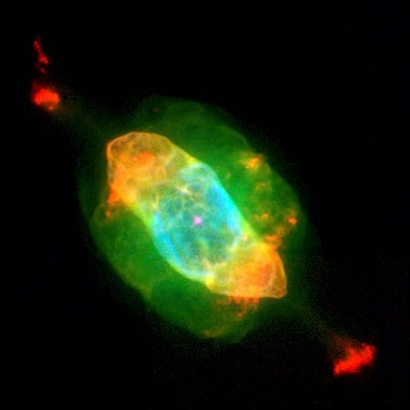 NGC 7009 has a bright central star at the center of a dark cavity bounded by a football-shaped rim of dense, blue and red gas. The cavity and its rim are trapped inside smoothly-distributed greenish material in the shape of a barrel and comprised of the star's former outer layers. At larger distances, and lying along the long axis of the nebula, a pair of red "ansae", or "handles" appears. Each ansa is joined to the tips of the cavity by a long greenish jet of material. The handles are clouds of low-density gas. NGC 7009 is 1,400 light-years away in the constellation Aquarius. The Hubble telescope observation was taken April 28, 1996 by the Wide Field and Planetary Camera 2.
View »
28-Jan-2023 23:26 UT