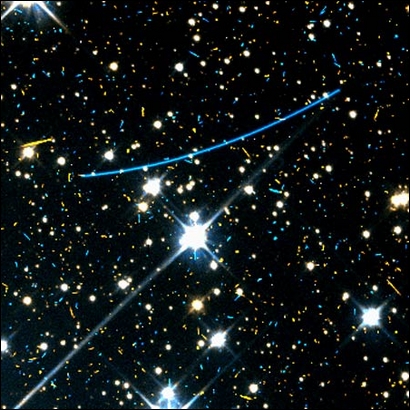 Hubble captured a bright asteroid, with a visual magnitude of 18.7, roaming in the constellation Centaurus. Background stars are shown in white, while the asteroid trail is depicted in blue at top center. The trail has a length of 19 arc seconds. This asteroid has a diameter of one and one-quarter miles (2 kilometers), and was located 87 million miles from Earth and 156 million miles from the sun. Numerous orange and blue specks in this image and the following two images were created by cosmic rays, energetic subatomic particles that struck the camera's detector.
View »
8-Dec-2022 09:23 UT