NICMOS Peers Through Dust to Reveal Young Steller Disks. A View of DG Tau B

NICMOS Peers Through Dust to Reveal Young Steller Disks. A View of DG Tau B 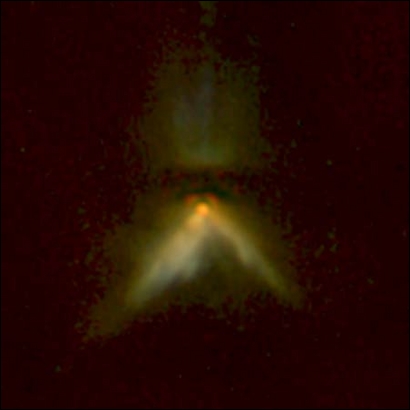 An excellent example of the complementary nature of Hubble's instruments may be found by comparing the infrared NICMOS image of DG Tau B to the visible-light Wide Field and Planetary Camera 2 (WFPC2) image of the same object. WFPC2 highlights the jet emerging from the system, while NICMOS penetrates some of the dust near the star to more clearly outline the 50 billion-mile-long dust lane (the horizontal dark band, which indicates the presence of a large disk forming around the infant star). The young star itself appears as the bright red spot at the corner of the V-shaped nebula.
View »
14-Aug-2022 04:09 UT