NICMOS Peers Through Dust to Reveal Young Stellar Disks. A View of IRAS 04016+2610

NICMOS Peers Through Dust to Reveal Young Stellar Disks. A View of IRAS 04016+2610 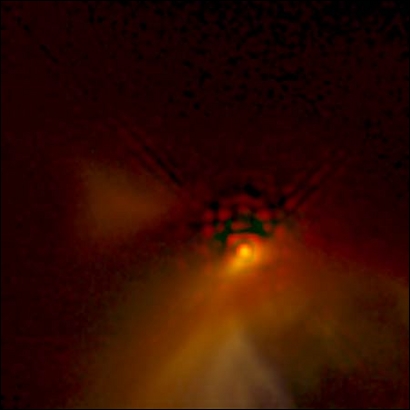 A very young star still deep within the dusty cocoon from which it formed is shown in this image of IRAS 04016+2610. The star is visible as a bright reddish spot at the base of a bowl-shaped nebula about 100 billion miles across at the widest point. The nebula arises from dusty material falling onto a forming circumstellar disk, seen as a partial dark band to the left of the star. The necklace of bright spots above the star is an image artifact.
View »
14-Aug-2022 04:03 UT