NICMOS Peers Through Dust to Reveal Young Stellar Disks. A View of IRAS 04248+2612

NICMOS Peers Through Dust to Reveal Young Stellar Disks. A View of IRAS 04248+2612 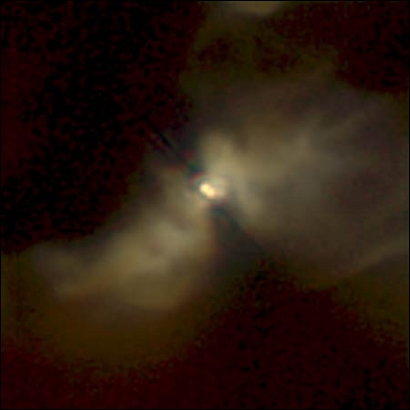 In this image of IRAS 04248+2612, the infrared eyes of NICMOS peer through a dusty cloud to reveal a double-star system in formation. A nebula extends at least 65 billion miles in opposite directions from the twin stars, and is illuminated by them. This nebula was formed from material ejected by the young star system. The apparent "pinching" of this nebula close to the binary suggests that a ring or disk of dust and gas surrounds the two stars.
View »
6-Oct-2022 11:04 UT