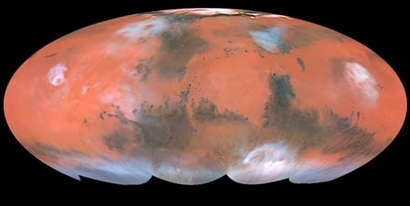 The four hemispheric views shown above have been combined into a full-color global map (called a Mollweide projection), showing the regions of Mars imaged by the Hubble telescope during the planet's closest approach to Earth. Latitudes below about 60 degrees south were not viewed by the telescope because the planet's north pole was tilted towards Earth during this time. This image is a composite of pictures taken with three filters: blues (410 nanometers), green (502 nanometers), and red (673 nanometers). The Hubble telescope's resolution is 12 miles per pixel (20 kilometers per pixel) near the Martian equator.
View »
29-Sep-2022 23:07 UT