The Disruption of Beta Pictoris' Disk

The Disruption of Beta Pictoris' Disk 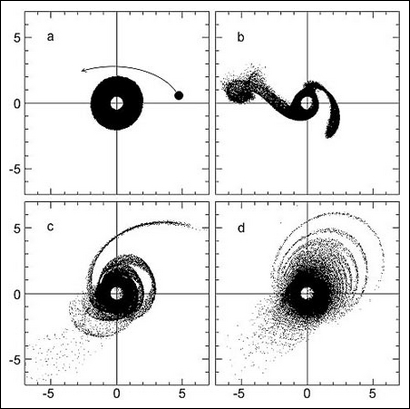 These four images are from a computer simulation of a star flying by and disrupting a circumstellar disk of dust around the star Beta Pictoris. Frame (a) shows the encounter setup, where a small M-class star swings within 700 astronomical units (1 AU is the distance between Earth and the Sun) of Beta Pictoris, an A-class star. The circumstellar disk, seen as a black donut in this overhead view, has a 500 AU radius. In (b) the gravitational tug of the intruder star pulls the dust disk into two tidal tails stretching far beyond the disk's initial radius. Like spaghetti wrapped around a fork, the tidal tails are tangled together in (c). This leads to the formation of concentric ringlets of dust (d) on one side of the star. The entire sequence takes 100,000 years. This simulation explains observed asymmetries, knots, and other unique features of the Beta Pictoris disk.
View »
29-Sep-2022 23:38 UT