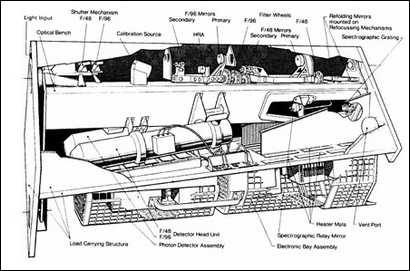 The Faint Object Camera (FOC) was built by the European Space Agency. It is an optical and ultraviolet camera which is able to count the individual rays of light (or light particles/photons) as they arrive. The resolution of FOC is stunning - more than seven times better than Hubble's famous WFPC2 camera. FOC has two complete detector systems, each producing an image on a phosphor screen that is 100,000 times brighter than the light received. A television camera then scans this phosphor image. This television camera is so sensitive that objects brighter than 21st magnitude must be dimmed by the camera's filter systems to avoid saturating the detectors.
View »
1-Feb-2023 16:24 UT