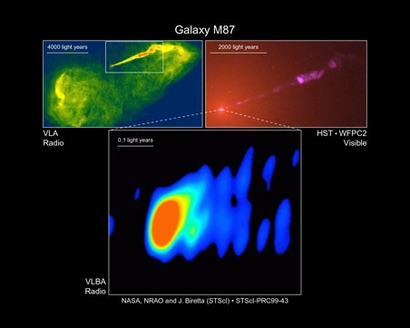 Space Telescope Science Institute astronomers and their co-investigators have gained their first glimpse of the mysterious region near a black hole at the heart of a distant galaxy, where a powerful stream of subatomic particles spewing outward at nearly the speed of light is formed into a beam, or jet, that then goes nearly straight for thousands of light-years. The astronomers used radio telescopes in Europe and the U.S., including the National Science Foundation's (NSF) Very Long Baseline Array (VLBA) to make the most detailed images ever of the center of the galaxy M 87, some 50 million light-years away.
View »
27-Sep-2022 09:02 UT