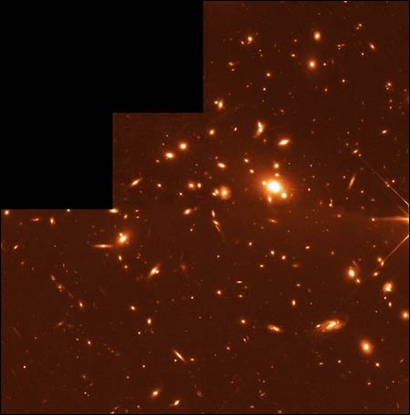 This NASA/ESA Hubble Space Telescope image was taken with the Wide Field and Planetary Camera 2 (WFPC2) in red light. The two hour exposure spans 2.5 arcminutes. The image shows an overview of the massive galaxy cluster Abell 1835 (right) which is acting as a gravitational telescope enhancing the light from background galaxies. The galaxy cluster is at a distance of 3.5 billion light years and numerous gravitational arcs can be seen in the image. In the centre of the cluster a massive giant elliptical galaxy is surrounded by several smaller ellipticals. The box indicates the galaxy SMM J14011+0252, also called J1/J2, which was first observed with the SCUBA (Sub-millimetre Common User Bolometer Array) instrument on the James Clerk Maxwell Telescope in Hawaii.

For further information, please click the news release link below.