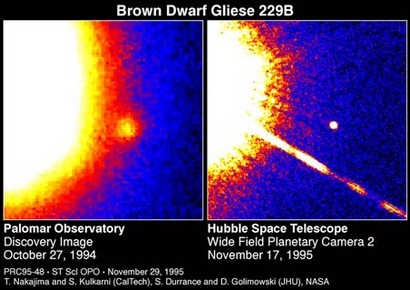 These two false-color telescope images reveal the faintest object ever seen around a star beyond our Sun, and the first unambiguous detection of a brown dwarf. The brown dwarf, called GL229B, orbits the red dwarf star Gliese 229, located approximately 18 light-years away in the constellation Lepus. The brown dwarf is about 20-50 times the mass of Jupiter, but is so dense it is about the same diameter as Jupiter (80,000 miles).
View »
5-Feb-2023 23:41 UT