Trapezium Cluster in the Orion Nebula

Trapezium Cluster in the Orion Nebula 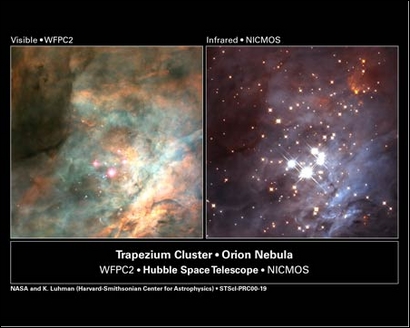 The brown dwarfs are too dim to be seen in a visible-light image taken by the Hubble telescope's Wide Field and Planetary Camera 2. This view also doesn't show the assemblage of infant stars seen in the near-infrared image. That's because the young stars are embedded in dense clouds of dust and gas. The Hubble telescope's near-infrared camera, the Near Infrared Camera and Multi-Object Spectrometer, penetrated those clouds to capture a view of those objects.

Probing deep within a neighborhood stellar nursery, NASA's Hubble Space Telescope uncovered a swarm of newborn brown dwarfs. The orbiting observatory's near-infrared camera revealed about 50 of these objects throughout the Orion Nebula's Trapezium cluster, about 1,500 light-years from Earth.

Appearing like glistening precious stones surrounding a setting of sparkling diamonds, more than 300 fledgling stars and brown dwarfs surround the brightest, most massive stars [center of picture] in Hubble's view of the Trapezium cluster's central region. All of the celestial objects in the Trapezium were born together in this hotbed of star formation. The cluster is named for the trapezoidal alignment of those central massive stars.