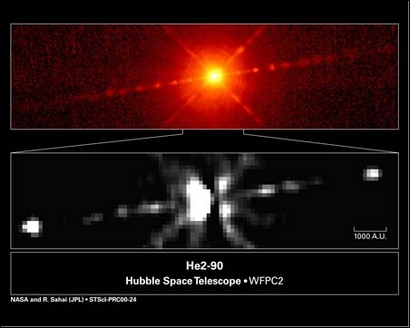 Astronomers using NASA's Hubble Space Telescope have stumbled upon a mysterious object that is grudgingly yielding clues to its identity. A quick glance at the Hubble picture at top shows that this celestial body, called He2-90, looks like a young, dust-enshrouded star with narrow jets of material streaming from each side. But it's not. The object is classified as a planetary nebula, the glowing remains of a dying, lightweight star. But the Hubble observations suggest that it may not fit that classification, either.
View »
6-Feb-2023 00:55 UT