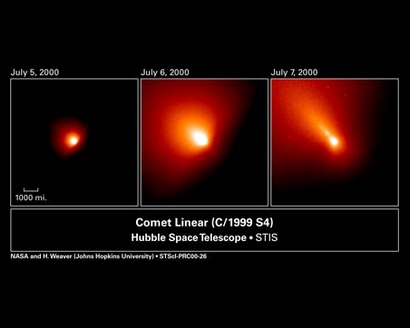 These three photographs taken with the Hubble Space Telescope chronicle a violent outburst in the life of comet LINEAR, also known as C/1999 S4. The orbiting observatory's Space Telescope Imaging Spectrograph tracked the streaking comet for two days, July 5 to 7, capturing a dramatic leap in its brightness [left image]; followed by seeing a wave of newly created dust from the outburst flowing into the coma, a shell of dust surrounding the core [middle image]; and culminating in the discovery of a castoff chunk of material from the nucleus sailing along its tail [the bright dot trailing behind the comet in the picture at right]. The white region represents the brightest part of the coma. The nucleus cannot be seen in these images because it is about a mile or so across, which is too small for the Hubble telescope to see.
View »
14-Aug-2022 09:08 UT