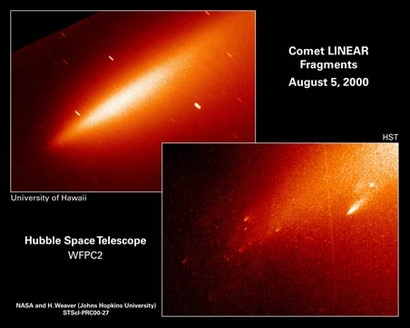 In one stunning Hubble picture the fate of the mysteriously vanished solid nucleus of Comet LINEAR has been settled. The Hubble picture shows that the comet nucleus has been reduced to a shower of glowing "mini-comets" resembling the fiery fragments from an exploding aerial firework.

A ground-based telescopic view (2.2-meter telescope) of Comet LINEAR taken on August 5, at nearly the same time as the Hubble observations.