The Dynamic HH-30 Disk and Jet

The Dynamic HH-30 Disk and Jet 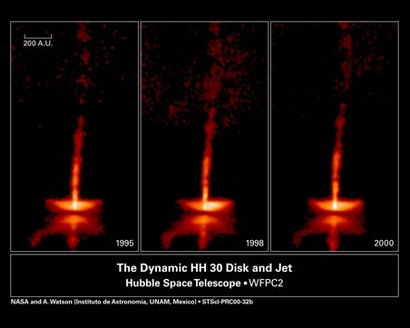 These images of HH 30 show changes over only a five-year period in the disk and jets of this newborn star, which is about half a million years old. The pictures were taken between 1995 and 2000 with the Wide Field and Planetary Camera 2 aboard NASA's Hubble Space Telescope. Astronomers are interested in the disk because it is probably similar to the one from which the Sun and the planets in our solar system formed.
View »
6-Feb-2023 00:05 UT