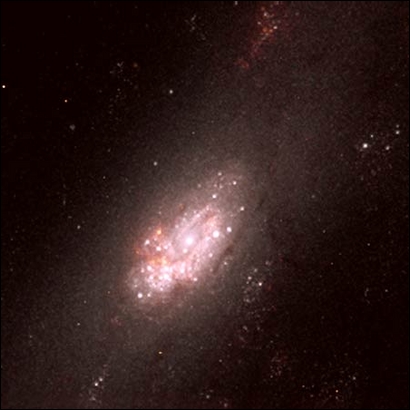 This image was obtained with the Near Infrared Camera and Multi-Object Spectrograph (NICMOS) onboard the NASA/ESA Hubble Space Telescope. It shows the region around the core of the barred spiral galaxy NGC 2903. Several bright star clusters (white knots) are seen as well as the circumnuclear ring around the core. The reddish areas are regions of ionised hydrogen and regions where large amounts of dust partly obscure our view. The image was constructed from two infrared NICMOS exposures: 704 seconds through an 1870 nm filter (shown as red) and 192 seconds through a 1600 nm filter (shown as blue). The green colour in the image is a combination of these two exposures. Acknowledgement: The data that went into this Hubble image were originally obtained by William Sparks (Space Telescope Science Institute).
View »
29-Jan-2023 09:04 UT