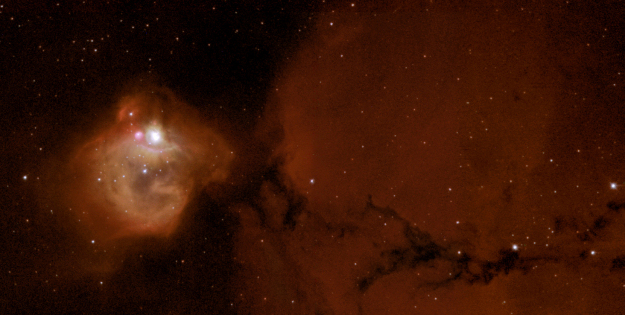 Extremely intense radiation from newly born, ultra-bright stars has blown a glowing spherical bubble in the nebula N83B, also known as NGC 1748. A new NASA/ESA Hubble Space Telescope image has helped to decipher the complex interplay of gas and radiation of a star-forming region in a nearby galaxy. The image graphically illustrates just how these massive stars sculpt their environment by generating powerful winds that alter the shape of the parent gaseous nebula. These processes are also seen in our Milky Way in regions like the Orion Nebula.

The Hubble telescope is famous for its contribution to our knowledge about star formation in very distant galaxies. Although most of the stars in the Universe were born several billions of years ago, when the Universe was young, star formation still continues today. This new Hubble image shows a very compact star-forming region in a small part of one of our neighboring galaxies - the Large Magellanic Cloud. This galaxy lies only 165 000 light-years from our Milky Way and can easily be seen with the naked eye from the Southern Hemisphere.