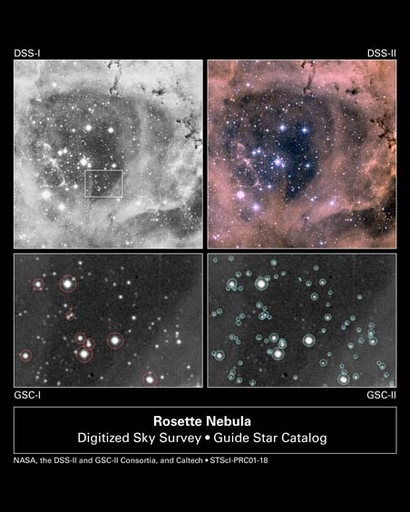 Depicts: Rosette Nebula, NGC 2237
Copyright: NASA, the DSS-II and GSC-II Consortia (with images from the 'Palomar Observatory-STScI Digital Sky Survey of the northern sky, based on scans of the Second Palomar Sky Survey are copyright ) 1993-1999 by the California Institute of Technology)
Show in archive: true

It's a very big universe out there, and an astronomer's work is never done when it comes to simply counting and cataloging the sheer number of stars in the heavens. Completing a seven-year effort at digitizing the entire sky for a second time, astronomers at the Space Telescope Science Institute and the Osservatorio Astronomico di Torino are releasing the Guide Star Catalog II. This new version, which replaces the historic 1989 catalog, provides important information on nearly one-half billion stars over 20 times as many as the original Guide Star Catalog.
24-Oct-2021 23:06 UT