Star Clusters Born in the Wreckage of Cosmic Collisions

Star Clusters Born in the Wreckage of Cosmic Collisions 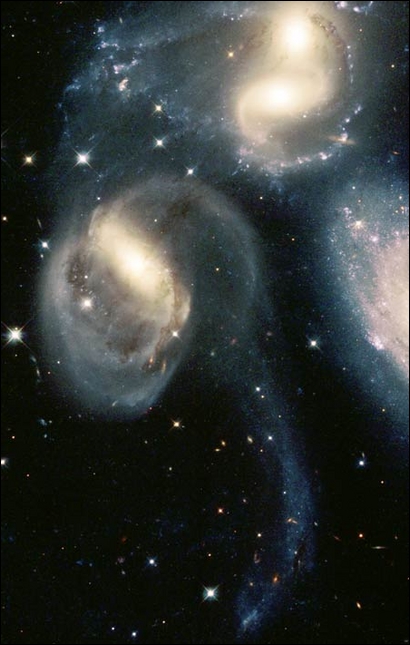 In the beginning of the 1946 holiday film classic "It's a Wonderful Life," angelic figures take on the form of a famous group of compact galaxies known as Stephan's Quintet. In reality, these galaxies aren't so heavenly. Pictures from the Hubble telescope show that Stephan's Quintet has been doing some devilish things. At least two of the galaxies have been involved in high-speed, hit-and-run accidents, which have ripped stars and gas from neighboring galaxies and tossed them into space. But the galactic carnage also has spawned new life. Arising from the wreckage are more than 100 star clusters and several dwarf galaxies. The young clusters, each harboring up to millions of stars, are shown clearly for the first time in pictures taken by Hubble's Wide Field and Planetary Camera 2.
24-Oct-2021 22:56 UT