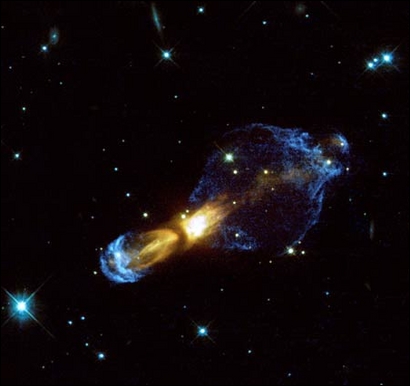 This new, detailed, Hubble image shows a planetary nebula in the making a proto-planetary nebula. A dying star (hidden behind dust and gas in the centre of the nebula) has ejected massive amounts of gas. Parts of the gas have reached tremendous velocities of up to one-and-a-half million kilometres per hour. Shown in blue is light from hydrogen and ionised nitrogen arising from supersonic shocks where the gas stream rams into the surrounding material. The image shows for the first time these complex gas structures which are predicted by theory. The Hubble image was taken shortly before Christmas 2000 with the WFPC2 instrument (Wide Field and Planetary Camera 2) in four different filters. Here, light from 791 nm is displayed in red (exposure time 900 s), 675 nm in green (900 s), while combined light from hydrogen (656 nm) and ionised nitrogen atoms (658 nm) are shown as blue (14,700 s).
View »
27-Sep-2022 08:34 UT