The Hubble Space Telescope and the Faint Object Spectrograph

The Hubble Space Telescope and the Faint Object Spectrograph 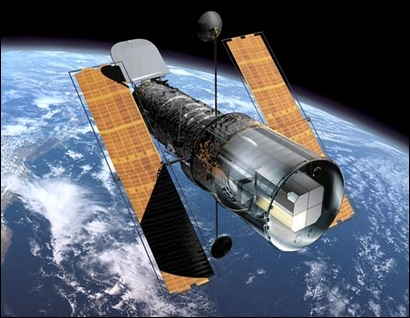 This illustration shows the NASA/ESA Hubble Space Telescope in orbit above the Earth as it looked before the Second Servicing Mission in 1997. The Faint Object Spectrograph (FOS) can be seen (marked in yellow) in Hubbles instrument bay at the back of the observatory. During the Second Servicing Mission the two first generation instruments, FOS and the Goddard High Resolution Spectrograph (GHRS), were replaced by the second generation instruments, NICMOS (Near Infrared Camera and Multi-Object Spectrometer) and STIS (Space Telescope Imaging Spectrograph). A dedicated team effort to understand and correct systematic effects in observations from FOS has now been concluded and the results are released on 11 September 2001. A four-person team based at the Space Telescope-European Coordinating Facility (ST-ECF) in Garching, Germany, has carried out this re-calibration with support from scientists at the Space Telescope Science Institute and the Goddard Space Flight Center. ST-ECFs 'Instrument Physical Modelling Group' has expended ten man-years of effort in understanding the intricate details of the instrument and in developing a novel physical model of its operation. This has allowed them to develop routines to correct for unwanted instrumental and environmental effects in the measurements of stars and galaxies.
View »
30-Sep-2022 00:14 UT