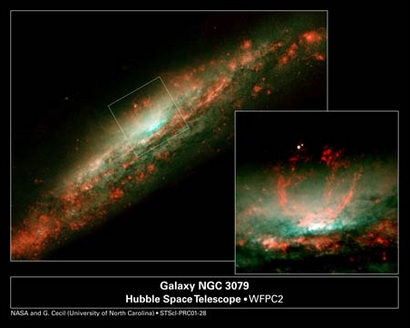 These NASA Hubble Space Telescope snapshots reveal dramatic activities within the core of the galaxy NGC 3079, where a lumpy bubble of hot gas is rising from a cauldron of glowing matter. The picture at left shows the bubble in the center of the galaxy's disk. The structure is more than 3,000 light-years wide and rises 3,500 light-years above the galaxy's disk. The smaller photo at right is a close-up view of the bubble. Astronomers suspect that the bubble is being blown by "winds" (high-speed streams of particles) released during a burst of star formation. Gaseous filaments at the top of the bubble are whirling around in a vortex and are being expelled into space. Eventually, this gas will rain down upon the galaxy's disk where it may collide with gas clouds, compress them, and form a new generation of stars. The two white dots just above the bubble are probably stars in the galaxy.
View »
29-Sep-2022 23:52 UT