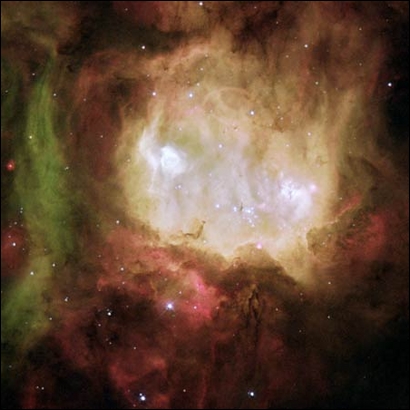 The 'Ghost Head Nebula' is one of a chain of star-forming regions lying south of the 30 Doradus nebula in the Large Magellanic Cloud. Two bright regions (the 'eyes of the ghost'), named A1 (left) and A2 (right), are very hot, glowing `blobs' of hydrogen and oxygen. The bubble in A1 is produced by the hot, intense radiation and powerful stellar wind from a single massive star. A2 has a more complex appearance due to the presence of more dust, and it contains several hidden, massive stars. The massive stars in A1 and A2 must have formed within the last 10 000 years since their natal gas shrouds are not yet disrupted by the powerful radiation of the newly born stars.
View »
7-Jul-2022 12:51 UT