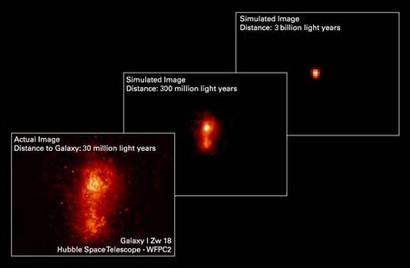 These three pictures illustrate how a nearby irregular galaxy brimming with star birth would appear at successively greater distances from Earth.

The pictures illustrate that less of the galaxy is seen at successively greater distances from Earth because the fainter stars are no longer visible.

This simulation demonstrates that astronomers may be missing most of the starlight from the farthest galaxies because it's too faint to see, even with the most powerful telescopes. The star birth they are detecting is just the "tip of the iceberg."