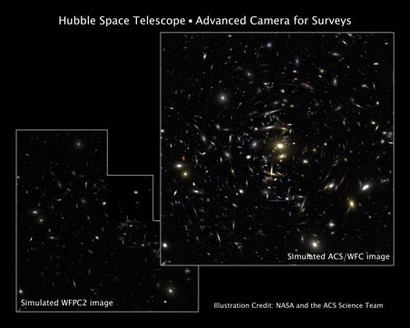 NASA's Servicing Mission 3B for the Hubble Space Telescope will give the orbiting observatory a new camera that will significantly increase Hubble's abilities and enable a broad array of new astronomical discoveries. The Advanced Camera for Surveys (ACS) covers twice the area, has twice the sharpness, and is up to five times more sensitive to light than Hubble's workhorse camera, the Wide Field and Planetary Camera 2. The servicing mission will begin on Feb. 28 with the launch of the space shuttle Columbia. The simulated image [above, right] depicts how the cosmos will look through the "eyes" of the ACS.
View »
8-Dec-2022 08:57 UT