ESA Science & Technology - ACS Will Find the Most Distant Galaxies

ACS Will Find the Most Distant Galaxies

ACS Will Find the Most Distant Galaxies 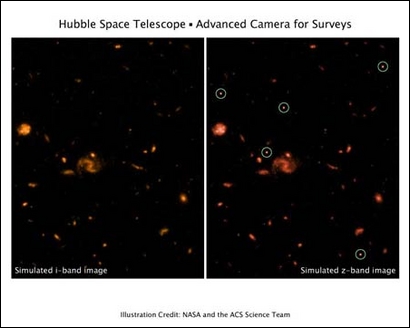 A demonstration of ACS's ability to detect and identify the most distant galaxies in the universe, which are seen at an epoch when the universe was only about 5% of its present age. These primordial galaxies (circled) will be visible in images taken through the ACS "z-band" filter, the reddest filter in the ACS instrument, but not in images taken with bluer filters, such as the "i-band" image shown here.

Unlike more local galaxies, which are visible in the bluer filters as well, the very large "redshifts" of galaxies at the edge of the observable universe mean that no light is emitted at the blue end of the spectrum. The vastly improved red sensitivity of ACS will enable astronomers to pick out and study such primordial galaxies from among the myriad of other, more commonplace, galaxies.