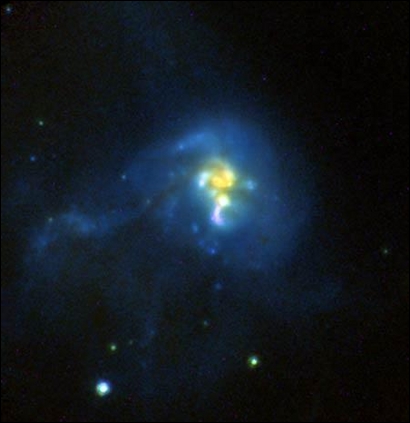 Two powerful cameras aboard the NASA/ESA Hubble Space Telescope teamed up to capture the final stages in the grand assembly of galaxies. The photograph, taken by the Advanced Camera for Surveys (ACS) and the revived Near Infrared Camera and Multi-Object Spectrometer (NICMOS), shows a tumultuous collision between four galaxies located 1 billion light-years from Earth. The galactic wreckage is creating a torrent of new stars. The tangled-up galaxies, called IRAS 19297-0406, are crammed together in the centre of the picture. IRAS 19297-0406 is part of a class of galaxies known as ultraluminous infrared galaxies (ULIRGs). ULIRGs are considered the progenitors of massive elliptical galaxies. ULIRGs glow fiercely in infrared light and appear 100 times brighter than our Milky Way Galaxy. The large amount of dust in these galaxies produces the brilliant infrared glow. The dust is generated by a firestorm of star birth triggered by the collisions. IRAS 19297-0406 is producing about 200 new Sun-like stars every year - about 100 times more stars than our Milky Way creates. The hotbed of this star formation is the central region [the yellow objects]. This area is swamped in the dust created by the flurry of star formation. The bright blue material surrounding the central region corresponds to the ultraviolet glow of new stars. The ultraviolet light is not obscured by dust. Astronomers believe that this area is creating fewer new stars and therefore less dust. The colliding system [yellow and blue regions] has a diameter of about 30 000 light-years, or about half the size of the Milky Way. The tail [faint blue material at left] extends for another 20 000 light-years. Astronomers used both of Hubble's new cameras to witness the clusters of new stars that are forming from the galactic wreckage. NICMOS penetrated the dusty veil that masks the intense star birth in the central region. ACS captured the visible starlight of the colliding system's blue outer region. IRAS 19297-0406 may be similar to the so-called Hickson compact groups - clusters of at least four galaxies in a tight configuration that are isolated from other galaxies. The galaxies are so close together that they lose energy from the relentless pull of gravity. Eventually, they fall into each other and form one massive galaxy. This colour-composite image was made by combining photographs taken in near-infrared light with NICMOS and ultraviolet and visible light with ACS. The pictures were taken through these filters: the H-band and J-band on NICMOS; the V-band on the ACS wide-field camera; and the U-band on the ACS high-resolution camera. The images were taken on 13 and 14 May 2002.
View »
29-Nov-2022 21:19 UT