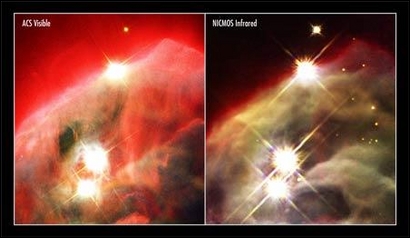 The revived Near Infrared Camera and Multi-Object Spectrometer (NICMOS) aboard the NASA/ESA Hubble Space Telescope has penetrated dust layers in a star-forming cloud to uncover a dense, craggy edifice of dust and gas [image at right]. This region is called the Cone Nebula (NGC 2264), so named because, in ground-based images, it has a conical shape. NICMOS enables the Hubble telescope to see near-infrared wavelengths of light, so that it can penetrate the dust that obscures the nebula's inner regions. However, the Cone is so dense even the near-infrared 'eyes' of NICMOS cannot penetrate all the way through it. The image shows the upper 0.5 light-years of the nebula. The entire nebula is 7 light-years long. The Cone resides in a turbulent star-forming region, located 2500 light-years away in the constellation Monoceros. Radiation from hot, young stars [located beyond the top of the image] has slowly eroded the nebula over millions of years. Ultraviolet light heats the edges of the dark cloud, releasing gas into the relatively empty region of surrounding space. NICMOS has uncovered the outer layers of dust to reveal even denser dust. The denser regions give the nebula a more three-dimensional structure than can be seen in the visible-light picture at left, taken by the Advanced Camera for Surveys aboard the Hubble telescope. In peering through the dusty facade to the nebula's inner regions, NICMOS has unmasked several stars [yellow dots at upper right]. Astronomers do not know whether these stars are behind the dusty nebula or embedded in it. The four bright stars lined up on the left are in front of the nebula. The human eye cannot see infrared light so colours have been assigned to correspond to near-infrared wavelengths. The blue light represents shorter near-infrared wavelengths and the red light corresponds to longer wavelengths. The NICMOS colour composite image was made by combining photographs taken through J-band, H-band, and Paschen-alpha filters. The NICMOS images were taken on 11 May 2002. Credits for NICMOS image: NASA, ESA, the NICMOS Group (STScI, ESA) and the NICMOS Science Team (Univ. of Arizona) Credits for ACS image: NASA, ESA, H. Ford (JHU), G. Illingworth (UCSC/LO), M.Clampin (STScI), G. Hartig (STScI), the ACS Science Team, and ESA
28-Oct-2021 02:07 UT