NICMOS finds a golden ring at the heart of a galaxy

NICMOS finds a golden ring at the heart of a galaxy 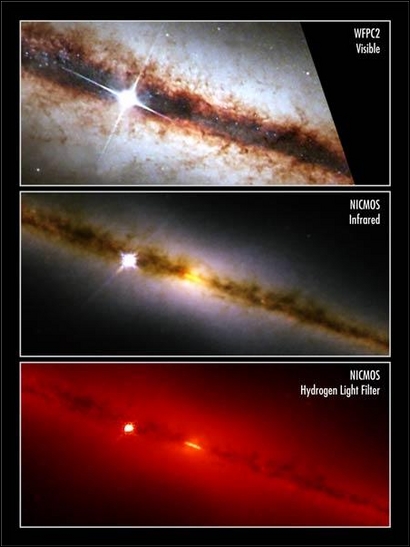 The revived Near Infrared Camera and Multi-Object Spectrometer (NICMOS) aboard the NASA/ESA Hubble Space Telescope has penetrated the dusty disc of the 'edge-on' galaxy NGC 4013 and looked right into the galactic core. To the surprise of astronomers, NICMOS found a brilliant band-like structure, that may be a ring of newly formed stars [yellow band in middle photo] seen edge-on. In the visible-light view of the galaxy [top photo], the star-forming ring cannot be seen because it is embedded in dust. The most prominent feature in the visible-light image - taken by the Wide Field and Planetary Camera 2 (WFPC2) - is the thin, dark band of gas and dust, which is about 500 light-years thick. NICMOS enables the Hubble telescope to see near-infrared wavelengths of light, so that it can penetrate the dust that obscures the inner hub of the galaxy. The ring-like structure seen by NICMOS encircles the core and is about 720 light-years wide, which is the typical size of most star-forming rings found in disc galaxies. The small ring is churning out stars at a rapid pace. The Milky Way Galaxy, for example, is more than 10 000 times larger than the ring. If the Milky Way produced stars at the same rate, it would be making 1000 times more stars a year. The human eye cannot see infrared light so colours have been assigned to correspond to near-infrared wavelengths. The blue light represents shorter near-infrared wavelengths and the red light corresponds to longer wavelengths. The ring-like structure is seen more clearly in the photo at bottom. This picture, taken with a filter sensitive to hydrogen, shows the glow of stars and gas. Astronomers used this information to calculate the rate of star formation in the ring-like structure. The extremely bright star near the centre of each picture is a nearby foreground star belonging to our own Milky Way. Rings of developing stars are common in barred spiral galaxies, which have 'bars' of stars and gas slicing across their discs. The bars funnel gas to the galactic cores. However, gravitational disturbances near the cores cause gas to accumulate into a lane or a ring. The gas then condenses to form stars. Because NGC 4013 is seen edge-on, astronomers do not know whether a bar of gas or some other mechanism formed the ring-like structure. NGC 4013, which looks similar to our Milky Way Galaxy, resides in the constellation Ursa Major, 55 million light-years from Earth. The middle picture is a colour composite image that was made by combining photographs taken through J-band, H-band, and Paschen-alpha filters. The bottom picture was taken through the Paschen-alpha filter. The images were taken on 12 May 2002.
View »
29-Nov-2022 21:56 UT