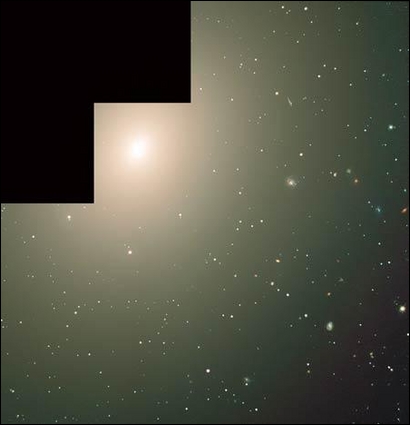 This colour image shows the elliptical galaxy NGC 4365. The image is a combination of two exposures taken with the NASA/ESA Hubble Space Telescope and one taken with ESO's Very Large Telescope. By combining these images a group of European and American astronomers have made a major discovery. They have identified a huge number of 'young' stellar clusters, in an old elliptical galaxy. For the first time, it has been possible to identify several distinct periods of star formation in a galaxy as old as this one. Elliptical galaxies have always been considered to have undergone one initial star-forming period and thereafter to be devoid of star formation. Most of the more than one hundred dots in the image are globular star clusters of which the young population (only a few thousand million years old) make up about one half. The light from NGC 4365 is yellow-reddish - a clear indication of its main population of old stars (about 12 thousand million years old). In the background more distant galaxies are seen through the outskirts of NGC 4365. Many of these have redder colours due to their large distance and their larger red shift (due to the expansion of the Universe the further away a galaxy is, the faster it recedes from us and the redder its light therefore becomes). NGC 4365 is located in the constellation of Pegasus at an approximate distance of 55 million light-years. This picture is composed of two images obtained with Hubble's Wide Field Planetary Camera 2 on 31 May 1996, and one obtained with the multi-mode ISAAC instrument on the 8.2-m VLT ANTU telescope at the ESO Paranal Observatory (Chile). The images were taken through a green filter (V-band, 2200 seconds, coloured blue), a red filter (I-Band, 2300 seconds, coloured green), and an infrared filter (K-band, 9500 seconds, 0.6 arcseconds seeing, coloured red).
View »
5-Oct-2022 09:12 UT