ESA Science & Technology - A Wheel within a Wheel

A Wheel within a Wheel

A Wheel within a Wheel 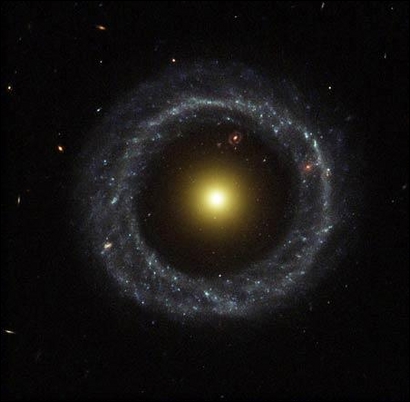 A nearly perfect ring of hot, blue stars pinwheels about the yellow nucleus of an unusual galaxy known as Hoag's Object. This image from the NASA/ESA Hubble Space Telescope captures a face-on view of the galaxy's ring of stars, revealing more detail than any existing photo of this object.

The entire galaxy is about 120,000 light-years wide, which is slightly larger than our Milky Way Galaxy. The blue ring, which is dominated by clusters of young, massive stars, contrasts sharply with the yellow nucleus of mostly older stars. What appears to be a "gap" separating the two stellar populations may actually contain some star clusters that are almost too faint to see. Curiously, an object that bears an uncanny resemblance to Hoag's Object can be seen in the gap at the one o'clock position. The object is probably a background ring galaxy.