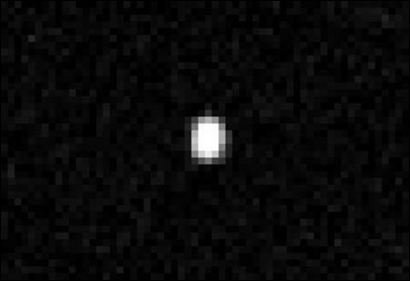 This photograph, taken by Hubble's Advanced Camera for Surveys, is a close-up view of the icy world. Only Hubble's sharp vision can resolve the disk of this distant world, leading to the first-ever direct measurement of the true size of a Kuiper belt object. Quaoar's diameter is about 800 miles (1300 kilometers).

It is the farthest object in the solar system ever to be resolved by a telescope. The Hubble photo does not show details of Quaoar's icy surface because the object is too far away. Quaoar is about 4 billion miles (6.5 billion kilometers) from Earth, more than 1 billion miles farther than Pluto. The photograph was made by assembling 16 pictures of the object. Observations were made July 5, 2002 and Aug. 1, 2002.