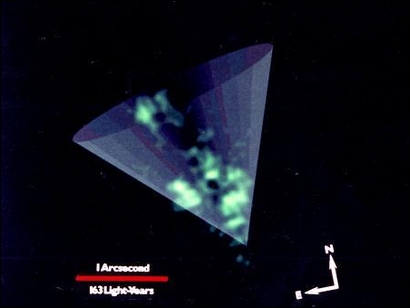 In this view of the core of galaxy NGC 1068, NASA's Hubble Space Telescope reveals far more detail than has ever been seen from the ground. This picture was taken through a narrow band filter with HST's Wide Field and Planetary Camera (WF/PC). The image was then computer processed to show additional detail in the clouds of ionized gas in the nucleus of NGC 1068. Clouds as small as 10 light-years across are clearly resolved in the central 150 light-years of the core. The clouds are glowing because they are caught in a "searchlight" of radiation beamed out of the galaxy's energetic nucleus, which may contain a massive black hole. A schematic representation of this invisible cone of ionizing radiation has been artificially added to the image to illustrate how radiation is beamed from the hidden nucleus.
View »
5-Feb-2023 07:36 UT

Hubble Space Telescope Probes a Galaxy with an Active Nucleus