A perfect storm of turbulent gases

A perfect storm of turbulent gases 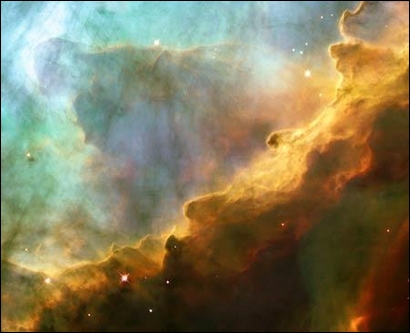 Like the fury of a raging sea, this anniversary image from the NASA/ESA Hubble Space Telescope shows a bubbly ocean of glowing hydrogen, oxygen, and sulphur gas in the extremely massive and luminous molecular nebula Messier 17. This Hubble photograph captures a small region within Messier 17 (M17), a hotbed of star formation. M17, also known as the Omega or Swan Nebula, is located about 5500 light-years away in the Sagittarius constellation. The release of this image commemorates the thirteenth anniversary of Hubble's launch on 24 April 1990. The wave-like patterns of gas have been sculpted and illuminated by a torrent of ultraviolet radiation from young, massive stars (which lie outside the picture to the upper left). The glow of these patterns highlights the 3D structure of the gases. The ultraviolet radiation is carving and heating the surfaces of cold hydrogen gas clouds. The warmed surfaces glow orange and red in this image. The intense heat and pressure cause some material to stream away from the surface, creating the glowing veil of even hotter green-coloured gas that masks background structures. The pressure on the tips of the waves may trigger new star formation within them. The image, roughly 3 light-years across, was taken on 29-30 May 1999, with Hubble's Wide Field Planetary Camera 2. The colours in the image represent various gases. Red represents sulphur; green, hydrogen; and blue, oxygen.
View »
29-Nov-2022 22:24 UT