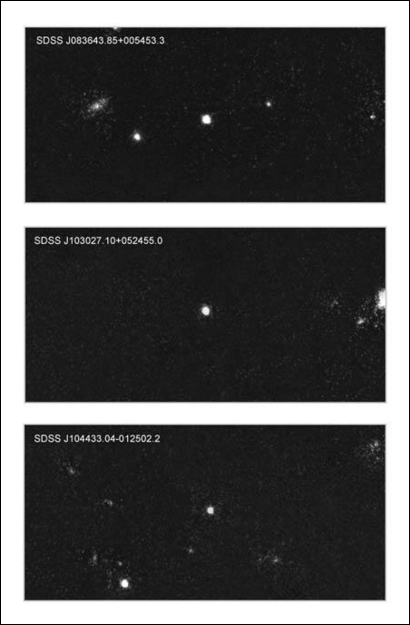 The remote quasars SDSS J083643.85+005453.3, SDSS J103027.10+052455.0, and SDSS J104433.04-012502.2, as observed with the NICMOS (Near Infrared Camera and Multi-Object Spectrograph) instrument on board the NASA/ESA Hubble Space Telescope. The quasars are shown in the centre of each image and are some of the most distant quasars known (redshifts of 5.82, 6.28, and 5.78). Quasars are some of the most exotic and ultraluminous sources known. They are powered by supermassive black holes in their centres. By splitting the infrared light from these quasars into its individual colours, a group of astronomers found huge quantities of iron. They believe that this element is produced in the very first generation of stars. This is the first time you can attribute a detected element directly to the very first stars in the Universe. "It is like holding the ashes of the first stars in our hands", say the astronomers. It implies that the first stars in the Universe were formed as early as 200 million years after the Big Bang, several hundred million years earlier than previously thought. Hubble's position above the atmosphere allows it to detect the infrared region of the spectrum that includes iron's signature at about 1.6-1.7 microns. This range is normally absorbed by the Earth's atmosphere and unavailable to Earth-bound telescopes.
View »
29-Nov-2022 21:12 UT