Rainbow Image of a Dusty Star

Rainbow Image of a Dusty Star 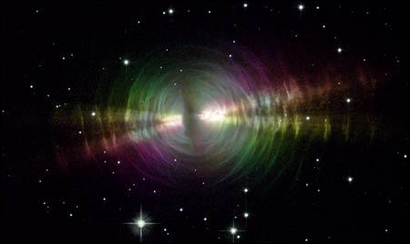 Resembling a rippling pool illuminated by underwater lights, the Egg Nebula offers astronomers a special look at the normally invisible dust shells swaddling an aging star. These dust layers, extending over one-tenth of a light-year from the star, have an onionskin structure that forms concentric rings around the star. A thicker dust belt, running almost vertically through the image, blocks off light from the central star. Twin beams of light radiate from the hidden star and illuminate the pitch-black dust, like a shining flashlight in a smoky room.

The Egg Nebula is located 3,000 light-years away in the constellation Cygnus. This image was taken with Hubble's Advanced Camera for Surveys in September and October 2002.