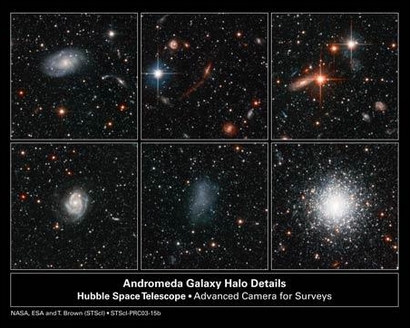 Glittering stars. Distorted galaxies. A cluster of more than 100,000 stars. The celestial objects in this six-panel photograph are just a sampling of the more than 300,000 stars and the thousands of distant galaxies seen in the image of a small region of the Andromeda galaxy's halo, a spherical cloud of stars around the galaxy. The image was taken with the Advanced Camera for Surveys aboard the NASA/ESA Hubble Space Telescope.
View »
9-Dec-2022 03:07 UT