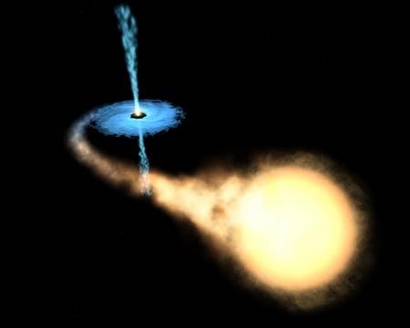 GRO J1655-40 is the second so-called 'microquasar' discovered in our Galaxy. Microquasars are black holes of about the same mass as a star. They behave as scaled-down versions of much more massive black holes that are at the cores of extremely active galaxies, called quasars. Astronomers have known about the existence of stellar-mass black holes since the early 1970s. Their masses can range from 3.5 to approximately 15 times the mass of our Sun. Using Hubble data, astronomers were able to describe the black-hole system. The companion star had apparently survived the original supernova explosion that created the black hole. It is an ageing star that completes an orbit around the black hole every 2.6 days. It is being slowly devoured by the black hole. Blowtorch-like jets (shown in blue) are streaming away from the black-hole system at 90% of the speed of light.
View »
30-Jan-2023 09:03 UT