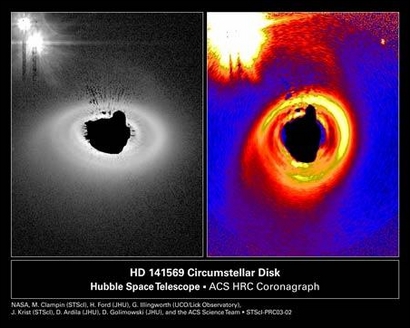 The NASA/ESA Hubble Space Telescope's new Advanced Camera for Surveys (ACS) has given astronomers their clearest view yet of the dust disk around a young, 5-million-year-old star. Such disks are expected to be the birthplace of planets.

The star, called HD 141569A, lies 320 light-years away in the constellation Libra and appears to be a member of a triple-star system. The image at left shows the star and disk as it appears in space. The system is slightly tilted when viewed from Earth. The photo at right portrays the system if astronomers could view it from above.